Indonesia banned the sales of beer in small retail outlets in 2015, and the Thai government also tried to push for a law to ban sales of alcohol near educational institutions in late 2015. In other countries such as Vietnam, there has been an increasing public resentment towards beer consumption, which encourages the government to levy higher taxes on this product over time.


Southeast Asia (SEA), with its high economic growth and low alcohol consumptions compared to the developed world, coupled with a young population and emerging middle class, is a promising market for beer producers.  International giants such as Heineken, Carlsberg, and Kirin are aggressively expanding in SEA by acquiring dominant domestic brands and each other, as Heineken bought the remaining stake in its subsidiary Asia Pacific Breweries from Fraser and Neave (F&N) in 2012. At the same time, prominent local players are also making deals: Thailand’s Boon Rawd is in a joint venture with Carlsberg, while Thai Beverage acquired F&N in 2013.

Though the market has a lot of potential, there are also risks: Indonesia banned the sales of beer in small retail outlets in 2015, and the Thai government also tried to push for a law to ban sales of alcohol near educational institutions in late 2015.  In other countries such as Vietnam, there has been an increasing public resentment towards beer consumption, which encourages the government to levy higher taxes on this product over time.

Out of the ten Southeast countries, this article will focus on Vietnam (VN), Thailand (TH), the Philippines (PH), Malaysia (MA) and Indonesia (IN) in order of per-capital beer consumption (hereunder referred to as TIPMV). Together they account for over 85% of the region’s population, and represent the huge potential that this region in general has to offer.

Among the TIPMV countries, Vietnam is the largest market with the highest consumption level per capita as well as annual growth.  Thailand, on the other hand, is the only country examined with negative annual growth rates in alcohol consumption at -2.4%.  Thailand’s negative growth is mainly attributed to the political crisis that took place at the end of 2013 and efforts to reduce alcohol consumption by the government. The Philippines appears to be static, while Malaysia and Indonesia, both containing a large Muslim population, understandably have relatively low annual consumptions of beer per capita.  Interestingly however, both their annual growth rates in beer consumption are comparatively high.  This reflects the increase in consumption by the non-Muslim population of both countries, as well the effectiveness of the beer companies’ aggressive advertising campaigns. 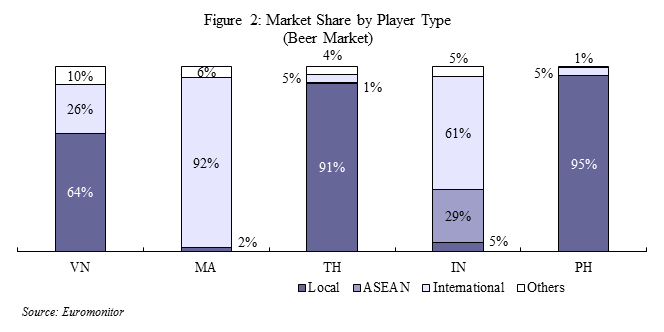 The first thing that stands out in this figure is the extremely high market concentration overall.  In every single market, the top 4 market leaders control more than 90% of the market. The Philippines is the most extreme in this regard, where a single company (San Miguel) has 91% of the total market share.

Another significant factor in these markets is the dominance of local companies and brands in Vietnam, Thailand and the Philippines.  Malaysia and Indonesia on the other hands are controlled mainly by international players. This difference again comes from cultural factors, where Malaysia and Indonesia are countries with Muslim majorities that do not consume alcohol. In the case of Malaysia, the situation can be explained by the relatively early entrances by international companies, as Carlsberg was first imported in 1903 and Heineken’s joint venture with F&N first brewed in 1932.  The two companies remain the only ones in Malaysia with the license to brew beer. Thailand, on the other hand, had its first brewery opened in 1933 by a domestic company, and had trade barriers to protect domestic production until 1992. 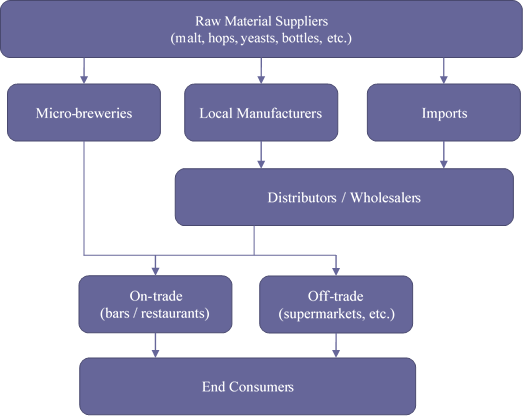 In general, beer is supplied to end-consumers through the supply chain above, although the importance of each actor and how much of the product actually goes through each channel may vary between countries.

Secondly, there are big differences within the upstream and downstream flows of beer supply. In the upstream flow, the quantity of local vs. imported beer supplied to the distributors is different between countries.  For example, in the Philippines the domestic manufacturers are the main supplier to beer distributors, whereas in Malaysia, imports account for the vast majority of the beer supply.  In the downstream flow, there are differences in the quantity of beer consumed in on-trade vs. off-trade establishments, as seen in the following graph.

In Vietnam and Malaysia, where on-trade sales are higher, consumers prefer drinking outside in gatherings and parties with colleagues and friends.  In such countries, the majority of foodservice outlets serve beer, including coffee shops.  In Malaysia, the heavy use of promotions and selling cheap beer (in beer towers and beer buckets) appear to be effective, leading to the same pattern in beer consumption. Conversely, in Thailand where off-trade sales are higher, consumer groups tend to drink beer for social and family gatherings at home, where the popularity of the economy lager stimulates off-trade sales.

Despite being a great source of tax revenue for governments, beer and alcohol in general draw negative sentiments in TIPMV countries which has led to efforts to thwart their growth.  This can be seen through government campaigns against or even downright bans of alcohol, as well as increasing taxes.

One method to curb alcohol consumption is the banning of alcohol in certain areas.  In 2015, Indonesia introduced a ban on small on-trade establishments that specialize on alcoholic drinks, despite oppositions from the tourism industry.  Despite the consumption of beer per capita being among the lowest in SEA, some factions within the Muslim-majority country is pushing for even harsher restrictions, with Islamic parties proposing a total ban on alcohol consumption.  The government of Thailand also pushed for reduced alcohol consumption, and in 2015 amendments were made to the Alcohol Control Act that prohibits the sale of alcohol near higher-educational institutions.

Increases in taxation can be seen in all five countries as well.  In Malaysia 15% tax on beer is set to increase further, after no changes since 2006.  The official figures are not yet announced, but it is expected to increase by at least 10%.  Vietnam’s Special Consumption Tax (SCT) on beer will gradually rise from 50% in 2015 to 65% in 2018.  Thailand’s excise tax rate is also set to increase further, while the Philippines has scheduled step-wise increases to its excise tax, currently at roughly 47%, by around 10% each year. Indonesia introduced a new regulation regarding imported alcohol in 2015 that resulted in increased import duties paid. 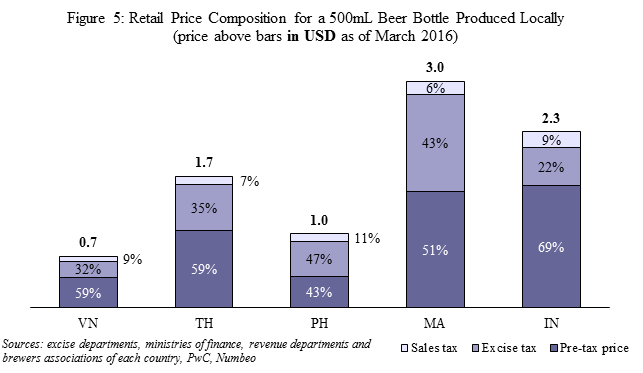 As seen in the figure above, most of the value of beer products are captured by the government in the form of taxes. The case of Malaysia is the mostly severe, where its rates are third in the world right behind Norway and Singapore[1]. Without the effect of taxes, it can clearly be seen that Vietnam and the Philippines enjoys lower price levels that are representative of their economic development, while consumers in Thailand, Malaysia and surprisingly Indonesia, are purchasing beer at much higher pre-tax prices. 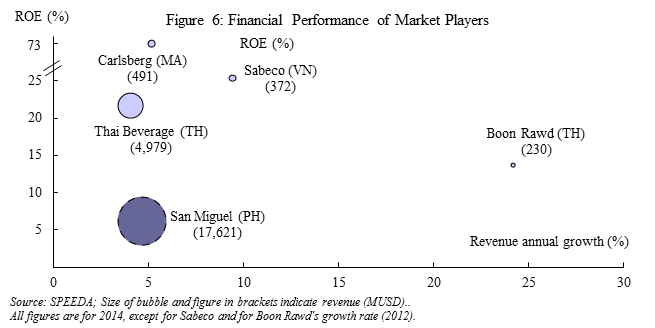 Looking at the five major beer producers for whom we have data, we see that they are all fast-growing, profitable businesses. Thailand’s local champion Boon Rawd shows the most potential with double-digit growth, while Carlsberg’s Malaysian operations attain ROE of nearly 73%. The only exception is San Miguel (highlighted with a dotted circle above), whose growth rate and profitability are merely 4.6% and 6.2%, respectively. The reason for this is that San Miguel, having saturated its domestic beer market, decided to branch out to other industries with very different risk-return profiles.

Breaking down the ROE for these players reveal the different conditions and strategies that are present. At the top of the spectrum, Carlsberg Malaysia is profitable mainly due to its efficient asset use, which has steadily increased from x1.6 in 2011 to x2.7 in 2014. On the other hand, San Miguel is so heavily indebted that if adjusted for leverage to be in line with its competitors, its ROE would fall to merely 2%. This result is not really surprising however, as the beer business only accounted for less than 15% of the group’s revenues in 2015.

In the last section of this report, we include a brief profile of the six major players within the TIPMV space, including two international giants (Heineken and Carlsberg) and four SEA challengers. Interestingly enough, the multinational giants are both dedicated beer players, while the local players have ventured out of their core industry into adjacent categories as well as non-related industries such as media & publishing, real estate and infrastructure. This underpins very different strategies the two groups use: international players command an established product portfolio and business model given their long history and global presence, which can be replicated quickly in a new market. Local players on the other hand are often owned by family business (TH) or governments (VN), who strive to maximize the synergy between beer and adjacent categories, and their movement in and out of industries reflect their quest for higher growth corresponding to different stages of maturity of such industries. 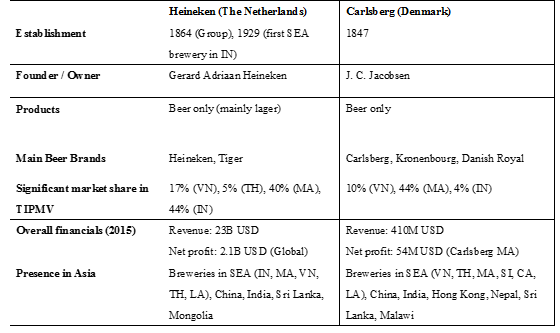 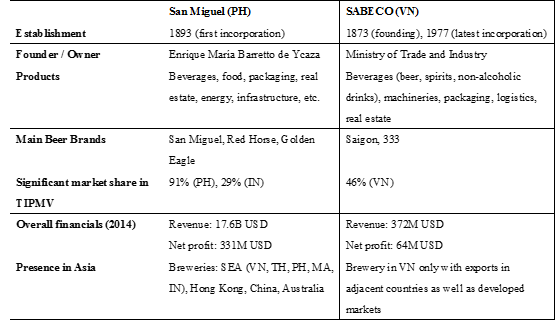 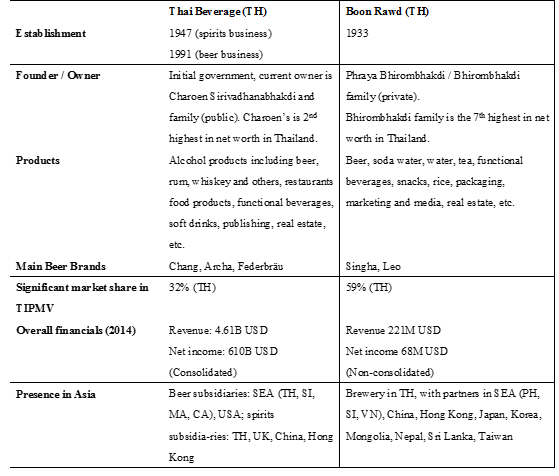 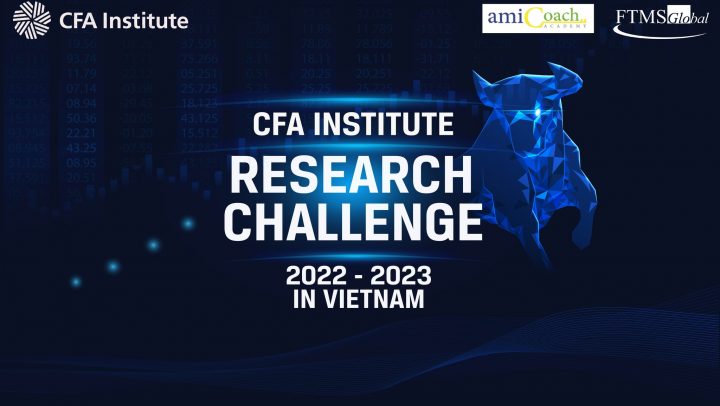 In Vietnam, CFA Institute Research Challenge 2022-2023 officially kicks off with the participation of many young talented candidates from different…